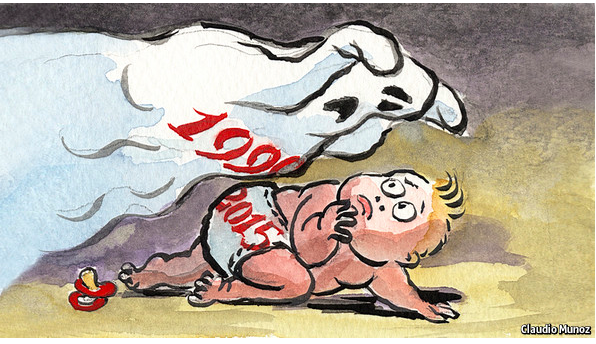 A FINANCIAL crash in Russia; falling oil prices and a strong dollar; a new gold rush in Silicon Valley and a resurgent American economy; weakness in Germany and Japan; tumbling currencies in emerging markets from Brazil to Indonesia; an embattled Democrat in the White House. Is that a forecast of the world in 2015 or a portrait of the late 1990s?

Recent economic history has been so dominated by the credit crunch of 2008-09 that it is easy to forget what happened in the decades before. But looking back 15 years or so is instructive—in terms of both what to do and what to avoid.

Then, as now, the United States was in the vanguard of a disruptive digital revolution. The advent of the internet spawned a burst of innovation and euphoria about America’s prospects. By 1999 GDP was rising by more than 4% a year, almost twice the rich-country average. Unemployment fell to 4%, a 30-year low. Foreign investors piled in, boosting both the dollar and share prices. The S&P 500 index rose to almost 30 times earnings; tech stocks went wild.

The optimism in America stood in stark contrast to gloom elsewhere, as it does today. Japan’s economy had slipped into deflation in 1997. Germany was “the sick man of Europe”, its firms held back by rigid labour markets and other high costs. Emerging markets, having soared ahead, were in crisis: between 1997 and 1999 countries from Thailand to Brazil saw their currencies crash as foreign capital fled and dollar-denominated debts proved unpayable.

Eventually, America ran into trouble too. The tech-stock bubble burst in early 2000, prompting a broader share price slump. Business investment, particularly in technology, sank; and as share prices fell, consumers cut back. By early 2001 America, along with most of the rich world, had slipped into recession, albeit a mild one.

Inevitably the parallels are not perfect. The biggest difference is China, a bit-part player in 1999 and now the world’s second-biggest economy, contributing disproportionately to global growth. But there are three trends at work that destabilised the world economy then and could do the same now.

The first is the gap between America, where growth is accelerating, and almost everywhere else, where it is slowing. In the late 1990s Larry Summers, then the US deputy treasury secretary, warned that the world economy was “flying on one engine”. For 2015 The Economist’s panel of forecasters expects 3% growth in America, compared with 1.1% in Japan and the euro area. China’s growth rate may fall to around 7%.

Americans can comfort themselves that, as in the late 1990s, the optimism gap is partially warranted. Jobs are being created in their country faster than at any time since 1999, cheap petrol has buoyed consumer spending and business investment has picked up. But the news is not all good: cheaper oil could tip plenty of America’s shale producers into bankruptcy in 2015, while a stronger dollar and weakness abroad will hurt exporters—just as they did 15 years ago. Britain, the other Anglosphere champion, may also be clobbered by the euro zone’s woes.

The second worrying parallel with the late 1990s is the dismal outlook for the rich world’s two other big economies. Germany’s growth rate has tumbled to around 1% and there is a deeper malaise caused by years of underinvestment, a disastrous energy policy and a government that is too obsessed by its fiscal targets to spend money and too frightened of its voters to push through the sort of structural reforms that Gerhard Schröder implemented in 2003. Meanwhile Japan has repeated the error it made in 1997—thwarting its escape from stagnation with a premature rise in consumption tax.

The third echo of the 1990s is the danger in emerging markets. Back then the problem was fixed exchange rates and hefty foreign debt. Now the debts are lower, the exchange rates float and most governments have built up reserves. Still, there are growing signs of trouble, especially in Russia (see article). But other commodity exporters also look vulnerable, especially in Africa. Oil accounts for 95% of Nigeria’s exports and 75% of its government revenue. Ghana has already gone to the IMF for support. In other countries the danger lies in the corporate sector. Many Brazilian firms are heavily indebted in dollars. A rash of corporate defaults may prove less spectacular than Asia’s sovereign-debt crises in the 1990s, but they will make investors nervous and push up the dollar.

Add all this up and 2015 seems likely to be bumpy. Bears will bet that a surging dollar coupled with euro-zone torpor and a few emerging-market crises will eventually prompt a downturn in America. On the plus side, stockmarkets do not look as frothy as they did in the 1990s: the price/earnings ratio of the S&P 500 is 18, not far above its historical average. Although many big tech firms are investing recklessly, most have decent balance-sheets (see article). And the global financial system is less leveraged and hence less vulnerable to contagion. In 1998 Russia’s default felled LTCM, a big American hedge fund. Such knock-on effects are less likely today.

But if the world economy does stumble, restoring stability will be harder this time round because policymakers have so little room for manoeuvre. Back in 1999 the Federal Reserve’s policy rate was around 5%, leaving plenty of scope for cutting when the economy slowed. Nowadays interest rates all over the rich world are close to zero.

The political scene is also different, and not in a good way. At the end of the 1990s most people in the rich world had enjoyed the fruits of the boom: median American wages rose by 7.7% in real terms in 1995-2000. Since 2007, by contrast, they have been flat in America, and have fallen in Britain and much of the euro zone. All over the rich world voters are already grumpy with their governments, as polling numbers and their willingness to vote for protest parties show. If they are squeezed next year discontent will turn to anger. The economics of 2015 may look similar to the late 1990s, but the politics will probably be rather worse. 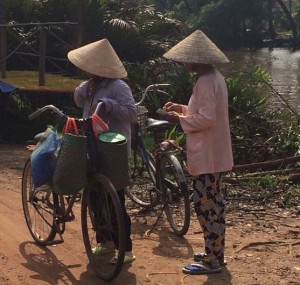